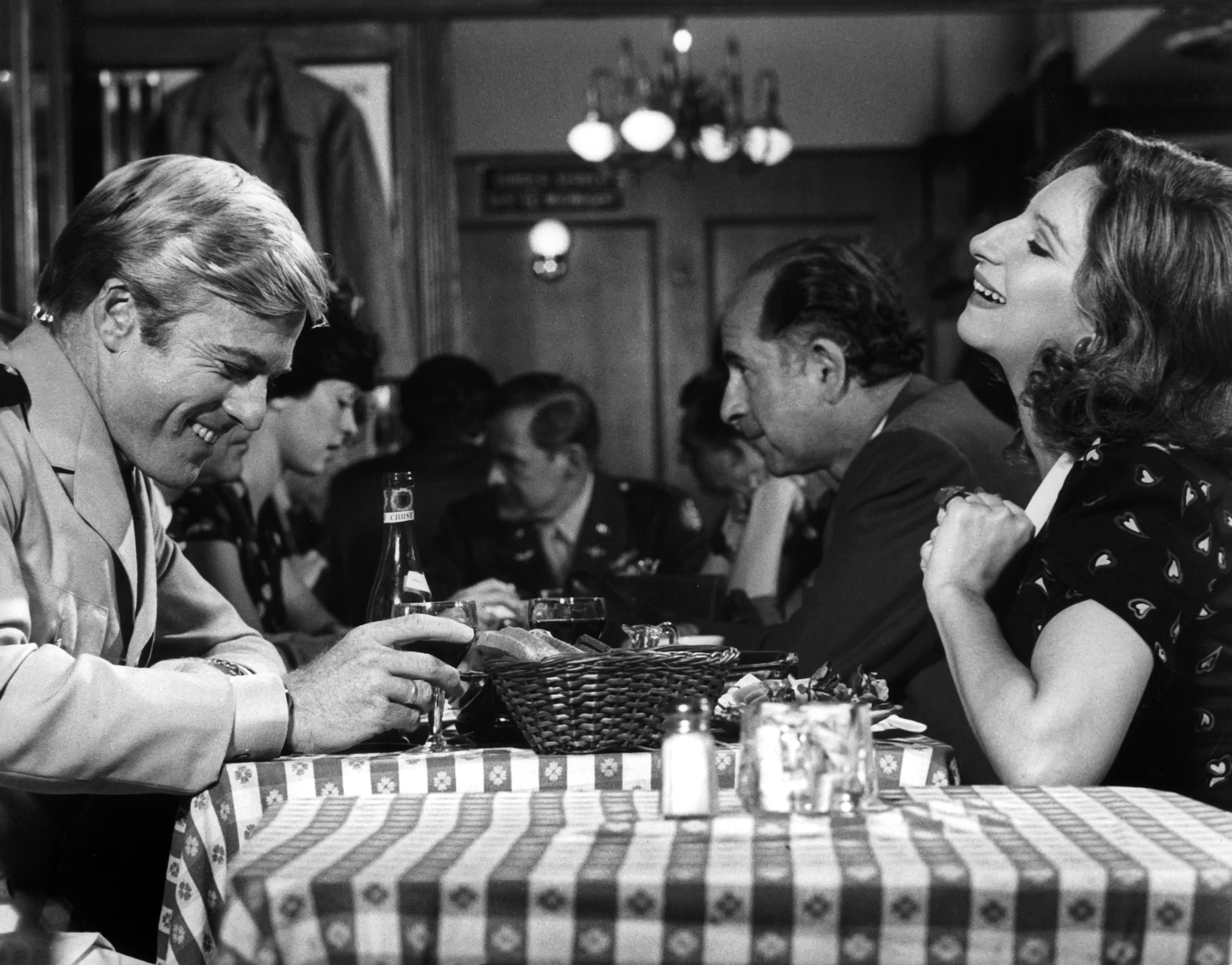 I asked Oliver what I should share in the blog today. His response… A post by Nathan Sanders, as reflected in the screenshot below, shared on his Facebook page, Pandora’s Music Box. Nathan posed a question to his Pandora app shuffler, SAM, that, in essence was … What is it that we need to remember?  SAM’s offering, The Way We Were, track from the movie of the same name. Listening to the song reminded me of seeing the movie as a kid, and how much I loved listening to the vinyl soundtrack on the turntable embedded in our then, in fashion, powerhouse of a sound system, drawered within the walls of a giant credenza-like piece of furniture. (see it featured in the short video clip above/right.)

I thought, what can I do with this? So, I closed my eyes, connected with my individual energy signature, tuned the frequency to 1973, and let the creativity flow. I was reminded the movie came out on October 19, 1973. Not a date that had any significance, though I remembered the movie fondly.

Barbra Streisand. Robert Redford. Need I say more? Premise: great looking, athletic blue blood meets quirky, super smart socially conscious chick at college. He dreams of becoming a writer – where his real talent lies; a vocation poo-poo’d by ones of his class. She dreams. Period. Each crushing on the other – unwilling to let go of the fear of stepping outside convention and giving a relationship a whirl. Click image above for larger view, or…
view the post reflected in the screenshot above by clicking here.

During WWII she runs into him at a bar, drunk. Passed out. She helps him back to her place. They make love, the most emotionally satisfying moment of her lifetime, and he has no memory of it the next morning. Of course! LOL. And what stuck with me – despite all the rest of the rigamarole, is that she encouraged him to become the writer he wished to be. And, in the doing he grew happier and more influential than anything he could have imagined in his wildest desires. Of course they split 3/4 of the way through, and the film ended with their forever connection showing through in the final scene, despite the differences that pulled them apart (socially).

As charming a walk as this was down novelty lane, I still had no idea what I was suppose to write about.

So, I thought of what else happened that year. I was in 8th grade. A 14 year old odd duck with a dense inquisitiveness, and a short attention span. I bored easily and was always looking for that next “thing” to fill the cup of my quenchless curiosity. Nothing of note there to grasp onto. What came to mind was that 1973 was the year my sister graduated from high school. When we were growing up back then, schools in rural Muncie, Indiana got out in late May, followed by any graduation ceremonies – all revving up and out before the knock of June. But what about my sister’s graduation could be interesting enough to write about? Nothing! (please forgive me sis. LOL) Therefore, I took my time travel experiment one step further. I Googled the phrase, what happened in May 1973, and was fascinated to see specific dates pop up in the search results list, with facts about what occurred therein. Yet, I had no idea what I was looking for. So I did what any inquisitive time-traveler would do, I dove right in.

I clicked on the most logical result, Wikipedia, Topic: May 1973. Interestingly, every single day of May in 1973 was shown with little trivia tidbits next to it. The only date I could think of was my sister’s birthday, May 15th. She’d have turned 18.

According to Wiki, on 5/15/1973, there was a Sierra Leonean general election and a Cayman Island tax haven scandal with the prime minister of the UK’s House of Commons. BORING!! Way to 3D for enlightenment. Now what??

Let’s call my sister Sarah. Not her name, but she’d shit a brick if I used her real name. She’s probably going to sue me for posting the holiday video above since she still had braces and her hair wasn’t perfect. Hope the family lawyer is ready to block off the next 5 years if she does! That’s what It’ll take for her to calm down and accept my settlement; a hug and a kiss. The only person more stubborn than she is me!

She’s still trying to come to terms with the fact that her oh-so-strange sister is free outside the four padded walls of a secure room in a bland, whitewashed building with no doors. With all this weirdness going on about me, the last thing she’d accept is being a part of this blog. LOL. So, I kept brainstorming… Oliver what is it you want here?

It felt like I was chasing a rabbit into the woods. The more I went within, the further without I became. Then it hit me. My sister and I only spent time together twice in the last 35 years. Once was in 1992 when I went home for my 15 year high school reunion, and the other – the spring of 2009 when my mom was in hospice care dying of cancer of the everything. That was it! May 26th, the date my mom transitioned. The day “more” began to flood into my moments of now. (If you don’t know the story of my mom’s gift to me upon her transition from this world to the next, I mention it in the 1HP article, Yes, Barbara… There is more!. You can also listen to a 3-part audio recording from 2013 offering a short story format of the experience, one shared in a series entitled Gift of Knowing.

The only thing of influence that registered directly from this entry was the phrase, THAT’S LIFE! Why? Well, that was the title of one of my mom’s favorite Frank Sinatra songs. Then, when I went to YouTube to find a copy to share here, I found this really fun version with over 27 million views. Between the aging filter used in the film footage for the That’s Life video, riding the personal wave of 1973, SAM’s sharing the clue filled title, The Way We Were, in response to a similarly revealing question, What is it that we need to remember? I knew it all spoke to the theme of this writing for today. P A S T – L I V E S.

What does the term past life mean to you?

The life you lived in the earlier portion of this 3D time reality? A prior incarnation? Multiple incarnations? How far back are you willing to suspend disbelief? One lifetime? Two? Twenty Two? Infinite | Endless | Ongoing?

Well, that’s what I got when I looked at the Wiki page for May 26, 1973. It is filled with locations and events centuries… even millennia old. Births. Deaths. All sorts of reminders of our perceived history – a placated history, for sure, skewed to the likings of historians and wiki-writers, alike. No recordation of facts that reflect the feeling of the moments shared, either. Yet, what a great place to start… or should I say middle… better yet, near end.. Transiti-end!

Now, I’m not one who subscribes to past life theory – at least I should say I have no personal, one-on-one experience with it. I haven’t had a past life regression session, or received a download from Oliver on the subject. Yet – having said that I know there is something to it. What exactly, I’m still on the fence about. Remember, I’m a debunker first.

I say this because I have a really good friend, as grounded as they come, a staple of his local community who, unbeknownst to most of his friends and family is a firm believer that he has had a number of past life experiences, and even hosts details as to the who, what, when and where. I trust this individual implicitly. I know them to be one of the highest integrity. So, if he says he has a knowing about the existence of past lives I believe him.

Then there’s the list of famous folks; some quite vocal, others not so much, who, too, believe. They include:

That enough for ya? I think I’m good to go!

My thoughts herein draw open the pocket door of further exploration; i.e., Where were you on Saturday, May 26, 1973? WHO were you? Were you in the physical yet, or merely “on hold” just beyond the pocket door, waiting to be born into the incarnation you embody today? With loved ones? With haters? In battle? In bottle? Baptized? Brutalized? Brilliant? Beautiful? Or maybe just a babbling billiard ball. Who else might you have been generations prior? Desire to be in the future? Have all of your incarnations been on earth? Other dimensions? Other cosmic locations?

Great questions for contemplation on this, now, another Saturday afternoon, just 44 years and change from the Saturday of yesterday… of May 26th, 1973.

If I have been another, I know one such person whom I was. Someone of Egyptian descent! That’s a given. Why? Because I married one, am closely connected to my family there, and feel as if I’ve known them forever… Maybe I have! Who do I want to be? Me. Just different versions of me. Some cool and quick witted. Some clever and quiet. Others still fancy and full of fun. What I don’t care about… have vs. have not. societally deemed good looking vs. ordinary. female vs. male. Yin? Yang? I’m color blind, turning on a dime, energy entwined, so I should turn out fine, time after time… after time.